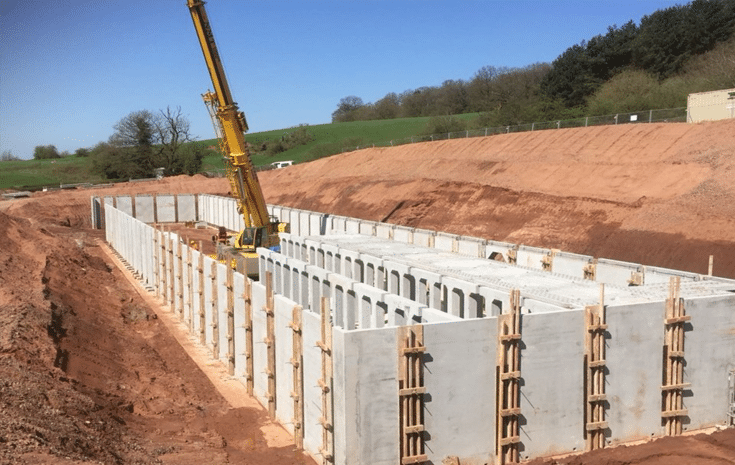 Carlow Concrete were delighted to be involved in the Severn Siphon project. Carlow Concrete were contracted by the Barhale / North Midland Alliance (BNMA) to design, manufacture & install a 3,500m3 pre-cast concrete attenuation tank near Hagley, just outside of Birmingham. Before we look at how this was solved we need to understand the history and current challenges facing the area.

The History of the Elan Valley Aqueduct:

The Elan Valley Aqueduct (EVA) is a 117km long Victorian era water structure built between 1893 and 1904. The aqueduct transports water entirely by gravity from the Elan Valley in Wales to Frankley Water Treatment Works in Birmingham, and comprises a combination of cut and cover conduits, siphons and tunnels. Over 100 years on and this wonderful piece of engineering still provides drinking water to the Severn Trent Water client base in Birmingham.

Now that we have learned some of the history, what changed in the last 100 years? And what needed to be added?

Wellhouse chambers exist at each of the transition points between tunnel / conduit and siphons. The Severn Siphon Outlet chamber is located on a hillside to the north of the village of Hagley, which is approximately 12km to the West of the city of Birmingham.

Severn Trent Water identified the need to protect local infrastructure from water escaping from the Severn Siphon Outlet chamber should a blockage occur in the EVA between this chamber at Hagley and Frankley Water Treatment Works in Birmingham. We were going to need to store the volume of water that would drain from the EVA between the Severn Siphon Inlet and Outlet wellhouses. The design solution was a new overflow system and precast concrete attenuation tank to be located at Severn Siphon Outlet chamber near Hagley. Challenge accepted!

–       the construction of an underground 3.5m deep precast concrete attenuation tank which connected to a new overflow structure approximately 200m away.

–       Our involvement saw over 1,300 tonnes of precast concrete delivered to site for the rapid build.

–       The attenuation tank was constructed in just 9 weeks, reducing the initial programme by a massive 8 weeks.

And there you have it, The EVA project was completed successfully in very good time.


Get a Quote  Downwload our Brochure